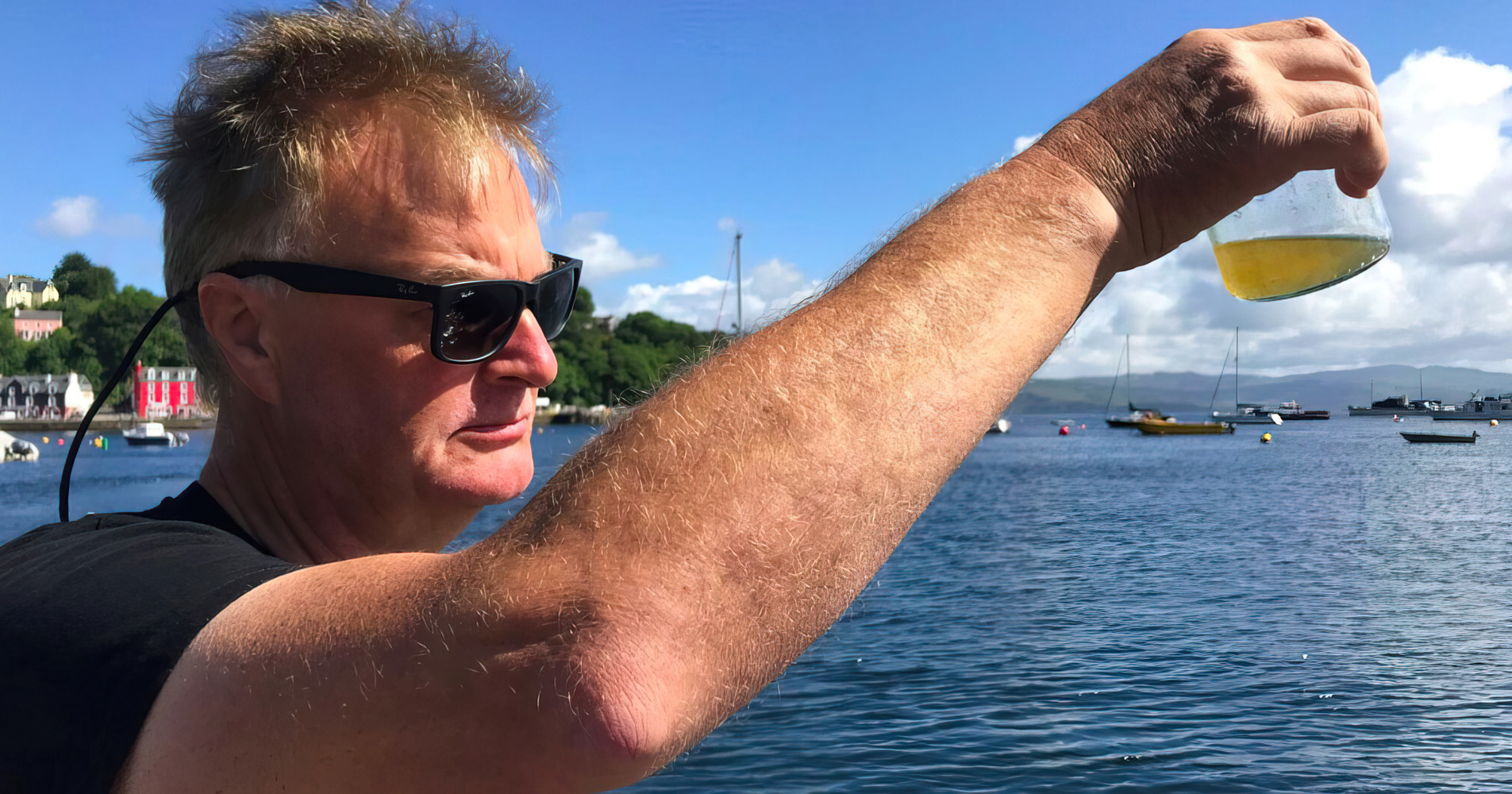 An Edinburgh-based research team says plankton, the tiny organisms that sustain life in the seas, has all but been wiped out. The team’s spent two years collecting water samples from the Atlantic and in a dire warning says this means the Atlantic’s ‘pretty much dead’.

At the bottom of the food chain, plankton is consumed by the krill which are fed on by the fish that, in turn, provide nutrition for terrestrial animals including billions of humans.

The research has been conducted by GOES (Global Oceanic Environmental Survey Foundation) using its yacht Copepod which has collected samples from the Atlantic and the Caribbean. From Scotland, it sailed along French and Portuguese coasts before crossing the Atlantic and is currently in Colombia, before setting sail for Panama.

GOES has also provided monitoring equipment to other sailing boat crews so that they can perform the same trawls and report back with their results.

“Given that plankton is the life-support system for the planet and humanity cannot survive without it, the result is disturbing,” says marine biologist and former Scottish Government adviser Dr Howard Dryden. “It will be gone in around 25 years. Our results confirmed a 90% reduction in primary productivity in the Atlantic. Effectively, the Atlantic Ocean is now pretty much dead.”

According to the Sunday Post, the research blames chemical pollution from plastics, farm fertilisers and pharmaceuticals. Previously, it was thought the amount of plankton had halved since the 1940s, but the evidence gathered by the Scots suggest 90% has now vanished.

"An environmental catastrophe is unfolding,’ says the report. ‘We believe humanity could adapt to global warming and extreme weather changes. It is our view that humanity will not survive the extinction of most marine plants and animals."

That threat is deemed as ‘a few years’ away before the consequences of plankton loss become catastrophically clear when fish, whales and dolphins become extinct.

The team has compiled and analysed information from 13 vessels and more than 500 data points.

The researchers expected to find up to five visible pieces of plankton in every 10 litres of water – but found an average of less than one. Conversely, they’d expected to discover 20 microscopic specks of toxic particles per litre of Atlantic water – but actually counted between 100 and 1,000.

The discovery suggests that plankton faces complete wipe-out sooner than was expected.

Plankton needs the right conditions to thrive, and perform its other role of helping oceans absorb carbon dioxide and giving off the chemical dimethyl sulphide, which assists in creating clouds. Where it thrives in slightly alkaline waters, the oceans are slowly turning more acidic.

An overload of CO2, says the Sunday Post, along with a deluge of lethal manmade chemicals in cosmetics, plastics, sunscreen, drugs and fertilisers, is inundating the marine environment. It’s all toxic to underwater life and once the water reaches a tipping point of acidity, vast amounts of plankton will simply dissolve.

‘If we destroy plankton, the planet will become more humid, accelerate climate change, and with no clouds it will also become arid and wind velocities will be extreme,’ says the report.

‘Yes, of course, we need to continue to reduce CO2 emissions but even if we were carbon-neutral, it will not stop ocean acidification – it will not stop the loss of all the seals, whales, marine birds, fish and food supply for two billion people.

‘CO2 reduction won’t even stop climate change; indeed, we will have catastrophic climate change because we have not fixed the primary root cause – the destruction of nature by toxic chemicals and substances such as plastic.

‘We have two choices. We can choose to wake up, understand and address the real issue or choose the game-over button for humanity come 2050.’

“Based on our observations, plankton numbers have already crashed and are now at the levels that I predicted would not happen for another quarter of a century,” Dryden told the Sunday Post.

“We surveyed the Caribbean from St Lucia to Grenada. Now the only fish available in restaurants there is imported farmed Atlantic salmon.

“It had been reported that 50% of the coral was gone; our observations were that the coral is 100% gone in many locations and 90% gone in all locations.

“We cannot stop climate change by simply reducing CO2 emissions. However, we can clean up our pollution to give us clean air and clear rivers and bring life back to the oceans. We could potentially live with climate change, but we will not survive the destruction of nature. If we can bring back nature, though, we also solve climate change.”

He said that during the pandemic, because of the lack of tourism, ecosystems had started to recover. Fish have returned and coral reefs have recovered.

“People cause pollution, and in most of the world there is no effluent treatment. Covid has shown us that if we eliminate pollution then ecosystems have high capacity to spring back.

“Scotland has already wiped out most of its fish, deep-water coral and polluted most of the coast. Trawling has destroyed seagrass, the loss of which is equivalent to the UK aviation carbon budget. The marine mammals in Scotland are among the most toxic on the planet.

“Scotland could set an example to the rest of the world and declare the country a non-toxic environment. Currently, we have a combined storm water and sewer system, so when it rains the municipal treatment systems are by-passed.

“This means we may only be treating as little as a quarter of our waste water.

“We will not stop making plastic but the new forms should be non-toxic and biodegradable.

“We need to turn to regenerative agriculture. We have already wiped out 80% of all insects and 100% will be gone in 20 years, then agriculture collapses because there is no pollination.”

In a recent report, UK NGO Environment Investigation Agency says that marine plastics will have outweighed the total mass of fish in the world’s oceans by 2050, and the production of plastic pollution constitutes a planetary emergency.

While many organisations are working on cleaning the oceans after the water is polluted, Ocean Cleanup has begun work on intercepting plastic pollution in what it thinks is the heaviest polluting river in the world by making a fence which stops rubbish getting into the sea.